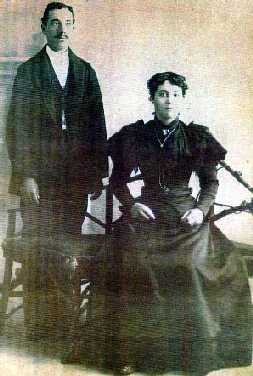 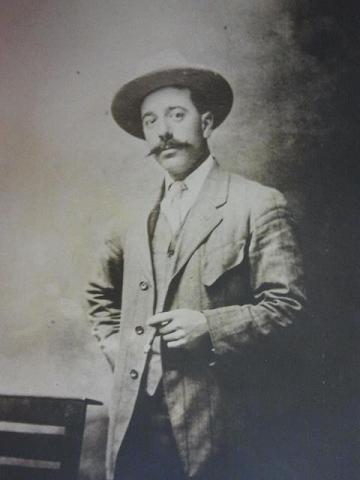 Alfredo Francisco Delgado was born on July 16, 1879, in Santa Fe, baptized on July 22, 1879 in Santa Fe. His daughter Margaret Delgado, used to say that "grandfather" was born on the plaza, where the Penney's is (i.e. used to be) on San Francisco Street. At the time of Alfredo's birth that was the home of Simon Delgado and his family. Since in this case "grandfather" could not have meant my grandfather Frank Ortiz (born in Cerro Gordo), or her grandfather, Felipe S. Delgado (born in Los Cerrillos), I suspect that she meant her children's grandfather and that would be Alfredo.

I have a slip of paper that would seem to indicate that he made his first communion on March 3, 1888.

Alfredo married Catalina Garcia, who was born November 26, 1881, San Juan, baptized December 12, 1881. Catalina was 18 days old at her baptism. She died in Santa Fe on August 27, 1915. She was the daughter of José Benito Garcia and Cointa Larragoite, daughter of Benito Anselmo Larragoite and Feliciana Valdes. Catalina attended the Presbyterian Mission School in Santa Fe started by David McFarland. When Matilda Allison came to Santa Fe in 1881, the school was run down and in disrepair. She repaired the adobe building, replanted an orchard, and in 1884 took in ten girls as boarding students. Five years later a new building was ready. The school was for girls only and was called the Santa Fe Industrial and Boarding School for Mexican Girls. After 22 years of service, she moved to California, and the school was named in her honor.

Their only child was my grandmother, Margaret Mary (baptized Maria Margarita), who was born on September 9, 1900 in Santa Fe in the home of her grandparents Felipe S. Delgado, who had died in 1895, and Benigna Garcia deDelgado. 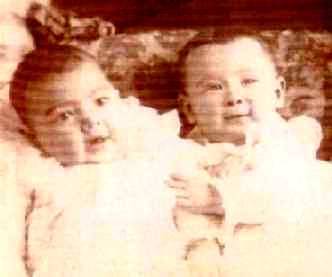 A picture of Margaret, on the right, and her cousin Josefita.

This home was on San Francisco Street and there is a picture of it on the page dedicated to them. It was replaced by the Lensic Theater, which no longer exists. The June 1900 census shows Benigna, Alfredo and Catalina living there with assorted family members. Benigna is listed as a 62 year old farmer and head of the household. It lists her late son Antonio's children, Nicolaza (15); Benigno (18) and Felipe (9) as her daughter and sons. Nicolaza is also listed as a boarder in the census for Loretto Academy. A granddaughter Juana (12) is also listed.

My grandmother used to recount how in those days extra space was built on when the children married. She used to say that all the grandchildren used to play in the patio and the grandmother, in this case Benigna, used to sit in the middle and watch. My grandmother said that in those days being a grandmother was a very serious thing. Like many New Mexican women, Benigna smoked cigarettes.

When Margaret was young Catalina spent much of the time at the Bouquet Ranch in Poqoaque, where her Aunt Petra Larragoite de Bouquet had lived.

Catalina died at a young age. According to her death certificate she died on August 27, 1915 in Santa Fe, at the age of thirty five of shock following an operation for exopthalmic goitre. Her occupation was housekeeping.

The newspaper notice of her death reads: "Mrs. Alfredo Delgado, wife of the U.S. Deputy Marshall Delgado, died this afternoon at the sanitarium following a surgical operation. She had been quite ill for the past few days and her relatives were alarmed about her condition. Mrs. Delgado was about 35 years of age and leaves a widower and one daughter. Her husband is now on his way home from Lansing, Kansas, where he took a federal prisoner and he is expected to arrive here tonight or early tomorrow morning."

Catalina's last letter to Margaret is addressed to Miss Margaret Delgado, Loretto Academy, Santa Fe, New Mexico. It is postmarked December 29th, 1914, Pojoaque, New Mexico. It reads (there are no accents in the original):

A grandson of Alfredo's brother Emilio says that his father Leopoldo used to talk fondly of his Tio Alfredo. He mentioned that at the time he was a U.S. Marshall, the latest craze was to smuggle illegal Chinese into the U.S. and that his Uncle Alfredo opened a crate somewhere and a Chinaman jumped out yelling at him in Chinese. He also said that his Tio Alfredo would transport prisoners to and from Mexico. Leopoldo many times mentioned that his Uncle Alfredo was a very good cheerful uncle, not like Emilio who was "cranque" all the time. However, apparently Antonio, the brother of Emilio and Alfredo, was worse than Emilio when it came to being "cranque". 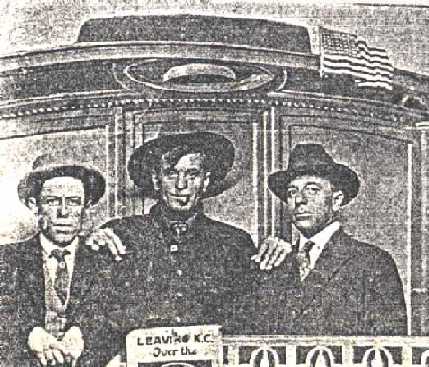 On March 29, 1920, The New Mexican reported that: Deputy United States Marshall Alfredo Delgado this morning seized 24 barrels and 78 kegs of cherry and grape cider containing six percent alcohol from the warehouse of B. F. McGuire. The containers were chopped open with an axe and the liquor poured into the Gallinas river. Delgado was in this city two months ago and took samples of the cider which on being tested showed 6 per cent alcohol content and led to the confiscation this morning.

Alfredo's daughter Margaret, my grandmother, remembered him as a man that no woman could resist.

Alfredo married Lucy Gaussoin on January 14, 1918 in Watrous in Mora County. They had a daughter Stella. On the 1920 census (ED no. 129, no. 10), Alfredo is Deputy U. S. Marshall and 40 years old. Lucy is 31 and is listed as having been born in Belgium and having Flemish as her mother tongue. Stella is 11 months old. They are living at 205 Dunlop Street. My grandmother, listed as Mary Margaret, is given as living with them. Nevermind that she seems to be listed as 11 years old.

A son, Alfred Theodore Delgado was born to them on December 10, 1920, but was premature and died at 8 am on the same day at the age of 5 hours. According to his death certificate, his address was 205 Dunlop in Santa Fe. His father was Alfredo Delgado born in Santa Fe and Lucy Gaussoin born in Los Alimos. the cause of death is listed as premature birth. He was buried in Rosario Cemetery on December 10, 1920.

According to her death certificate Lucy Gaussoin Delgado died in her home in Santa Fe at 205 Dunlop Street at 7:30 pm on March 5, 1921 at the age of 33 and 20 months and 16 days. She was a female, Spanish, married housewife married to Alfredo Delgado and had lived in Santa Fe for 3 years and 2 months. She had been born on December 17, 1888 in Los Alimos, San Miguel County, NM to Eugene Gaussoin, born in France, and Juanita Cabeza de Baca, born in Peña Blanca, NM. The cause of death was an incomplete, spontaneous abortion and infection, pregnancy coming about 8 weeks following a labor. She had been ill for 16 days. The informant was Alfredo Delgado. She was buried in Rosario Cemetery on March 8, 1921. This death certificate is different from the census that presents her as a Flemish speaking Belgian. It makes it look as if she was the daughter of Juana Cabeza de Baca born on May 27, 1867 to Francisco Crestina Cabeza de Baca and Martina Delgado, daughter of Juan Pablo Delgado and his first wife Irenea Nolan, born in El Placer.

I have also obtained a death certificate for Lucy's brother Eugene, who died at home at 714 Marquita Street in Santa Fe on May 16, 1940 at 11:30 am. The name of his wife was Virginia Gaussoin and she was the informant. Her age is not given. Eugene's birthdate is give as February 15, 1870 and his age at death as 70 years and 3 months. His birthplace is Las Animas, Colorado. His father is given as Theodore Gaussoin born in France and his mother as Juanita C. de Baca born in New Mexico. He was buried in Guadalupe cemetery on May 18, 1940. The cause of death was chronic myocardial failure over a 6-7 year time.

In the Miscellaneous Records of the Family Papers at the NM State Archives, there are a number of documents for Eugène Narcisse Gaussoin, born in Liège, Belgium in July 1812. His father's name was Pierre and his mother's name looks like Sperandina, though that doesn't seem like a name to me. He was in the military, Captain of the 2nd regiment of Artillery (1841), Chevalier of the Order of Leopold (1847), Croix de Fer, Capitaine Commandant, who resigned in 1850.

Alfredo's 3rd wife was Josephine Garcia. They had sons Alfredo and Arthur.

According to his death certificate, Alfredo died in Santa Fe at 2:15 am on June 21, 1929 of chronic cystitis. Syphilis was given as the secondary, contributory cause. He had been born in Santa Fe on July 17, 1879 and was 49 years, 11 months and 26 days old at the time of his death. His physician attended him from May 15th to June 21 and last saw him alive on June 19, 1929. His parents were Felipe Delgado, born in Cerrillos and Benenia Garcia, born in Santa Fe. He was a retired U. S. Deputy Marshall. He was married to Josephine Delgado. He resided at 809 Dunlop St. and was buried in Rosario Cemetery Santa Fe on June 23, 1929.

Alfredo Delgado, member of the prominent Delgado family of this city, and for eight years a deputy U. S. marshal, well known as a horseman and stockgrower, died last night after a long illness, at the age of 50 years. He died at this home, 809 Dunlap Street, surrounded by members of his family.

Mr. Delgado was a native of Santa Fe and lived here all his life. He had many friends here and throughout the state who will mourn his death.

A requiem mass will be celebrated at 8 a.m. tomorrow, Saturday, the Guadalupe church and interment will be on Sunday afternoon in Rosario cemetery. The funeral cortege will leave the Delgado residence on Dunlap street at 1:30 p.m. C. A. Rising & Company has charge of the funeral arrangements.