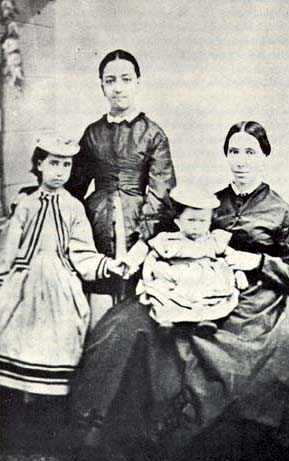 This photograph belonged to Benigna's granddaughter. Margaret Delgado de Ortiz, who always said that the smallest child was her uncle Emilio, but judging by the sizes of the children I would say that it would have to be José, who died before Margaret was born. Standing in the back is Manuela, then there is Luz and that would be Benigna holding the baby. The picture must date from about 1868.

In his book The Gringo, New Mexico and Her People (originally Bison Book, NY: Harper 1857), W.W. H. Davis recorded his impressions of a wedding he attended in Santa Fe in those days (winter 1853-1854). By my calculations, this must have been the wedding of Agapita Ortiz y Salazar (daughter of Antonio Ortiz and Rosa Salazar to Jesus Maria Sena y Baca (son of Miguel Sena and Manuela Baca on January 23, 1854) (Castrense marriage records p. 255) "The first winter I spent in Santa Fé I had the pleasure of attending a bona fide Mexican wedding, both parties being considered as belonging to the élite of the city. The father of the bride, Don Antonio, was a rico, and the happy groom was an officier of the Legislative Assembly. The ceremony took place on a Sunday evening, at the house of the bride's father, where a large number of guests were in attendance. The young lady was a comely lass, without being beautiful. The invitations specified eight o'clock as the hour when the performance was to come off, and, a short itme before, in company with some friends, I wended my way to the scene of the festivities. A carriage had been provided to convey us to the house, which we found in waiting at the door of the Honorable Secretary of the Territory. Duly seated in the rickety old machine, away we rattled, and, after a drive of a few minutes, were safely deposited at the threshold. The master of the establishment met us at the door, welcomed us in the most friendly manner, and conducted us across the court-yard into the house, passing through the sala into a smaller room beyond. Here were assembled some twenty ladies of all ages, and, in order to be a correct chronicler of events, I must add of all colors, from the fair skin of the pure Spanish blood to a good wholesome Indian brown. They were seated, some on benches and others upon the floor, quite after the manner of a Turk, and nearly evey one of them had cigaritos in their mouths, which they smoked with the nonchalance of the same number of men. Upon our entrance they maintained their dignity and silence, nor presumed to salute us even with a buenas noches. We seated ourselves, and, in obdience to the command of Don Antonio, made ourselves as much at home as the circumstances of the case would permit. Several other ladies came in, one at a time, until the room was quite well filled. Some of them were pretty and intelligent-looking, and dressed with considerable taste, but the wreaths of smoke which now and then came from the mouth and nostrils detracted considerably from their good looks, according to the American idea. In the centre of the room, stood a table filled with numerous bottles of liquor, both mild and strong, supported on each side by plates of cakes and sweetmeats, which fairly formed a breastwork around the spiritual comforters. As there were no other gentlemen invited to take a seat in the room with the ladies, we considered ourselves more highly honored than the rest of the company.... We had been seated some half a hour, when we were invited to walk into the sala, where the ceremony was about to come off. Here we found a large number of persons arranged around the room, each one holding a lighted candle. Upon our entrance candles were thrust into our hands, and we were conducted to the head of the room, where the altar was erected, and which appeared to be the post of honor. We took our position just ot the left of the officiating priest, who, duly robed and book in hand, stood ready to read the service. Immediately behind us were the musicians, two with violins and the third with a harp, who were charged to discourse music upon the occasion. In a few minutes the bridal party, four in number, entered the room, and advanced in front of and near the priest. The service was performed according to the rites of the Roman Catholic Church, and in a very few minutes the affianced couple were pronounced husband and wife. When the ceremony was about half concluded, the musicians commenced their discord, which they kept up until it was finished, the leader accompanyting the instruments with his voice, which sounded about as melodious as a dinner-horn out of tune. After the benediction was pronounced the ladies retired, and we saw no more of them; but the gentlement were invited to the refreshment-room to partake of a few of the good things of life. In a short time the company bade adieu to the host and bent their steps homeward, and thus was celebrated a Mexican wedding" (pp. 281-83).

Feliz García’s large family home was on the corner of Alto Street and Closson Street (formerly West Garcia Street). He was a prosperous merchant. In Adios Nuevo Mexico, Las Cruces: Yucca Tree Press, 1999, pp. 59-60, note 1, David Remley quotes J. J. Webb: "There were but a very few houses north of the Palace on the street now called Palace Avenue"... Don Augustin Duran, Don Felix Garcia, Don Antonio Sena y Baca, and James Conklin and one or two others lived not far from where the Presbyterian Church now stands and had quite grand houses for the time; and some of them (had) two or three acres cultivated in corn, beans, and red peppers, and a few apricot trees, the only fruit then raised int he town."

Vicente, 21, male born in NM, who married Cleofas Lucero on July 7, 1749 at San Juan de los Caballeros (in the January 1884 testimony that Homer Milford sent me Vicente Garcia says: "I am fifty-five years of age. I live in Santa Fe. I first knew the place called the 'Real de San Francisco' in 1840 or 1841. My parents resided there at that time at the Real de San Francisco. I was occupied at the parochial church at Santa Fe, but was often at San Francisco. I was there frequently, visiting my father, to 1846, and then went to live with my father. I then knew, and yet do know, the location of Real de San Francisco....") In 2000, the Historic Santa Fe Foundation purchased Vicente's house. It illustrates the Spanish tradition of constructing linear files of rooms around an inner courtyard. It has thick adobe walls that undulate irregularly along the driveway. It is listed on the National Register of Historic Places and State Register of Cultural Properties. Vicente was born in 1827 and died in1889. He was a prosperous merchant.

Cesaria, 12, female, born in NM.; She married Don Epifanio Vigil. She died of pneumonia on May 20, 1895 at 6:30 am . Besides the bereaved husband, three sons, Melisendro, Donaciano and Jose, are in mourning for a faithful and devoted mother. [SFDNM]