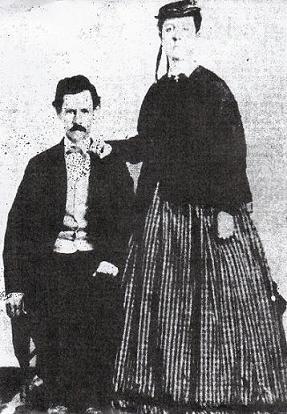 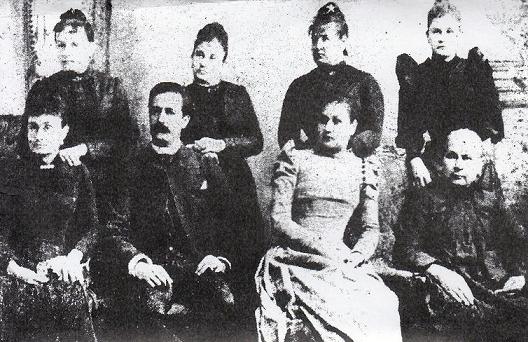 The picture to the left is of Alejandro and Refugio.
In the picture to right: seated from the left are Hortencia, Alejandro, Nicolas, Anita, and Mrs. Daguerre, standing are Maria, Josefina, Refugio and Eugenia.

Maria del Refugio Samaniego, daughter of Florentino Samaniego and Josefa Delgado y Ortiz, was born about 1830, Bavispe, Sonora, Mexico. She married Alejandro Guillermo Daguerre. According to a series of articles in the El Paso Herald of January 9-11, 1974, he was born in 1813 in Bayonne in the Department of the Lower Pyrenees of France. A hamlet in the region still bears the family name, Castel Daguerre. He was the son of Michel Daguerre and Marte-Jeanne N. Duyo. He came to Mexico as a teenager, apparently alone, and a political exile from France. One or two of his brothers also fled France beause of the Bonapartist leanings and ended up in Argentina. He came to El Paso at the age of 18 in 1831. He was handsome and refined and attractive to women. He was a strong outdoors man. His first wife was Carmen Guerra. Their only child before she died was Alejandro Librado. On November 15, 1849, Daguerre married Refugio. They had seven children: Hortencia, Maria, Josefina, Alejandro Nicolas, Refugio, Eugenia and Anita. The Daguerre home in Juarez was very large and well furnished, reflecting the owner's prosperity in the freighting business. There were two inner patios, a back yard and a corral for horses and poultry. During the American Civil War, Daguerre espoused the Confederate cause. He died May 18, 1885 in Cuidad Juarez, Chihuahua, Mexico. Refugio died November 21, 1900.

The New Mexico Prenuptial Investigations from the Archivos Historicos del Arzobispado de Durango, 1800-1893 (p. 211) have an investigation for Alejandro Guillermo Daguerre, 35, a native of Bayonne, Department of the Lower Pyrenees in France and a resident in Chihuahua for nine years) and Maria del Refugio Samaniego, 19, a native of Bavispe, Sonora, resident of El Paso for seven years, the legitimate daughter of Florentino Samaniego and Josefa Delgado. In El Paso on October 18, 1849, Josefa Delgado de Samaniego gave her permission for her daughter, Refugio Samaniego, to marry Alejandro Daguerre.