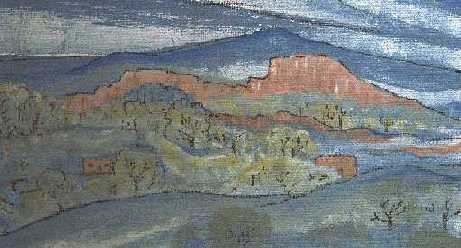 Fernando was the son of Manuel Francisco Delgado and Maria Josefa Garcia de Noriega. The birth date given for him is usually 1789, but I have never seen a baptismal record. He was born while his parents were still in the El Paso area.

A cousin, Fernando Caracena, has given this plausible reason why the name Fernando begins appearing so much in the family at this time: "I have a guess about why there were so many Fernandos in our families. In the early 1800s, France held King Fernando hostage, invaded Spain, and replaced the government with a puppet government. This marked the beginning of the break up of the spanish empire. The Spanish Colonials remained loyal to the King and the Church. Troops trained in northern Mexico to meet any attack that the French might mount from the north. These soldiers were known as Fernandistas. The succession of Fernandos in our family reveal the political leanings of our ancestors who named their son's Fernando after the hostaged king."

According to the New Mexico Marriages of Santa Fe and the Military Chapel of Our Lady of Light p. 135, Fernando Delgado married Ana Maria Ortiz on April 27, 1813 in Santa Fe. The witnesses were his sister Estefana Delgado de Ortiz and her husband Juan Rafael Ortiz. Fernando Delgado married Ana Maria Ortiz (the 6th child of Antonio Ortiz) and she died in about 1861 in El Paso.

They had only one child, Maria de Josefa de Jesus Delgado, born on January 22, 1814 and baptized on January 25, 1814 in Santa Fe. Fernando was killed during an Indian campaign near Las Vegas, New Mexico and buried in Santa Fe on June 16, 1821.

I found a service record for Fernando in State Archives. It is signed by Mariano Romero. The date is December 29, 1819 or 1818, both dates are on the sheet. According to it, as of this date Fernando Delgado was Alferez 2nd degree, 30 years of age, from the Capital of Santa Fe, "quality" son of Captain, and his health was robust. He had served for three years, three months and six days. He was in the Company of the voluntary militia of cavalry of the City of Santa Fe. Of his valor, it says that it was good, his effort, regular, his capacity, medium, his conduct good, his state, married.

A very interesting letter written to Fabiola Cabeza de Baca de Gilbert by her cousin Eduardo Baca y Sandoval (son of Julianita Romero --daughter of Josefa Delgado and Miguel Romero-- and Francisco Baca y Sandoval; Eduardo married Aniceta Delgado) is to be found in her papers at UNM. It is in Spanish and about "Captain" Fernando Delgado. Eduardo says that the story is absolutely true, but was never recounted in history books. All considered, I think that this must be the Fernando Delgado who married Ana Maria Ortiz. Eduardo says that his cousin Manuel Delgado (a reference to him as the father of Eduardo's cousin Sostenes makes this appear to be the son Marcos Delgado who married Veneranda Ortiz-- see information about Sostenes above) used to speak to him a lot about Captain Fernando Delgado. Manuel told him that Fernando was small in size and had a very violent temperament, that when he got angry if there was a hill he would lie down with his head downward to cool down. Manuel also told him that once the Indians robbed cattle in Las Vegas and help was sent for from Santa Fe. The Governor sent Captain Fernando with orders to follow the Indians and take the cattle away from them. But, he never went out without the blessing of his mother. He took some time off and rode horseback to his mother and asked for her blessing. Frightened, his mother asked him where he was going and he responded "to hell, give me your blessing fast, I don't have any time to lose". From there, he followed the Indians with a handful of soldiers and in the bloodletting, before going up a hill, he reached them and was hit so hard that he lost his life there. Eduardo says that he had never heard whether Don Fernando had a family or not, but he was married. Likewise, Eduardo didn't know whether his remains were left in Las Vegas or brought to Santa Fe.

My analysis of this letter is follows. As far as I know, the Fernando under discussion was never a Captain, but just reached the rank of Alferez and died in an Indian campaign in 1821. He was married and only had one child. His mother had been dead for a long time. There is the interesting possibility, however, that the "mother" who gave him her blessing was Rosalia Velarde, his grandmother, the widow of Captain Joseph Garcia de Noriega, who was living in the varrio de San Francisco in Santa Fe at the time of her death in April 1822.

Josefa Delgado y Ortiz married Florentino Samaniego. All Fernando Delgado's descendents are therefore through the Samaniegos, and I can tell that there are quite a few, the most well known ones being Ramon Samaniego (Novarro) of Hollywood and Dr. Mariano Samaniego of El Paso.

According to legal documents at UNM, Fernando Delgado married Ana Maria Ortiz (the 6th child of Antonio Ortiz) and she died in about 1861 in El Paso. They say that she had only one child, Maria de Josefa de Jesus Delgado, born on January 22, 1814 and baptized on January 25, 1814 in Santa Fe. She died in El Paso in about 1883. She married Florentino Samaniego and they had a child, Dr. Mariano Samaniego, who married a woman named Carmen. Ana Maria's second husband was Antonio Bicarra who died before 1861 and they had no children.

According to the New Mexico Marriages of Santa Fe and the Military Chapel of Our Lady of Light pp. 85-86, on April 14, 1824, Don José Antonio Viscarra, single, the son of Don Juan José Viscarra and Doña Gertrudis Alvarado of the Real of Cuencamé (mispelled in the book) province of Durango, Lt. Col. and Special commander of this provinces, married Doña Anna Maria Ortiz, widow of Sheriff Don Fernando Delgado.

Maria del Refugio, born about 1830. The New Mexico Prenuptial Investigations from the Archivos Historicos del Arzobispado de Durango, 1800-1893 (p. 211) have an investigation for Alejandro Guillermo Daguerre, 35, a native of Bayonne, Department of the Lower Pyrenees in France and a resident in Chihuahua for nine years) and Maria del Refugio Samaniego, 19, a native of Bavispe, Sonora, resident of El Paso for seven years, the legitimate daughter of Florentino Samaniego and Josefa Delgado. In El Paso on October 18, 1849, Josefa Delgado de Samaniego gave her permission for her daughter, Refugio Samaniego, to marry Alejandro Daguerre.

Mariano, born July 16, 1831 in Janos, Sonora, Mexico (this is the date and place of birth given on his Doctoral Thesis and student file from the Faculté de Médecine de Paris). Dr. Mariano Samaniego became an important person in the history of El Paso and there is a fair amount to be known about him. He kept up ties with New Mexico Delgados.

Florentino was killed by Apaches in 1838. His wife, Josefa Delgado y Ortiz went to live with an uncle, Father Ramon Ortiz who helped her raise her children.

In Down the Santa Fe Trail, Susan Shelby Magoffin provides an eye-witness account of Ana Maria Ortiz's household in El Paso. On Tuesday, February 16, 1847, she took up residence at el Señor Cura's house. She had been invited to live there and the house had been especially prepared. They stayed until March 14th. "El Señor Cura" was Ana Maria Ortiz del Delgado's brother Father Ramon Ortiz. During the Mexican War, Colonel Doniphan took him and other influential man as hostages.

On the 17th, she writes from the Casa del Señor Cura: "Agreeable to our arrangements we moved our boarding last evening to this the residence of the Priest, who is now a prisoner in the hards of Col. Doniphan, though I hope for no bad end. So far I find the family exceedingly kind and attentive. The affairs are in the hands of his two sisters Doña Anna Maria, a widow lady, and Doña Rosalita, Doña Anna's daughter, Doña Josafa, with her three children compose the family. Doña Anna Maria... is good & kind and seems to have rather the principal management, bears the name of a favorite in the village, she is a mui Senora in my estimation. How much I am struck with their manner of rearing children. The little daughter of Doña Josafita, only six years of age, carries with her the dignity of our girls of eighteen. It attracted my attention particularly the evening I came, with the same ease of a lady much accustomed to society, she entered the room, with a polite bow and "Bonus tardes", shook hands with me and seated herself. --The eldest daughter of 17 years is sick with sarampion." (This girl would seem to be Maria del Refugio and the other two girls Adelaida and Concepcion. The boys could have been away at school.)

On the 18th, she wrote: I am altogether pleased with our boarding house --the inmates are exceedingly kind and exert themselves so much to make me enjoy myself, 'twould be cruel if I did not attend to their solicitations. We have chocolate every morning on rising, breakfast about 10 o'k. dinner at two, chocolate again at dark, and supper at 9 o'oclock, all are attentive, indeed we are so free and easy, 'tis almost a hotel, means are served in our own room, one of the ladies always being in attendance to see and know if we are propperly attended to; the dishes are often changed, and well prepared. I shall have to make me a recipe book to take home, the cooking in every thing is entirely different from ours, and some, indeed all of their dishes are so fine 'twould be a shame not to let my friends have a taste of them too."