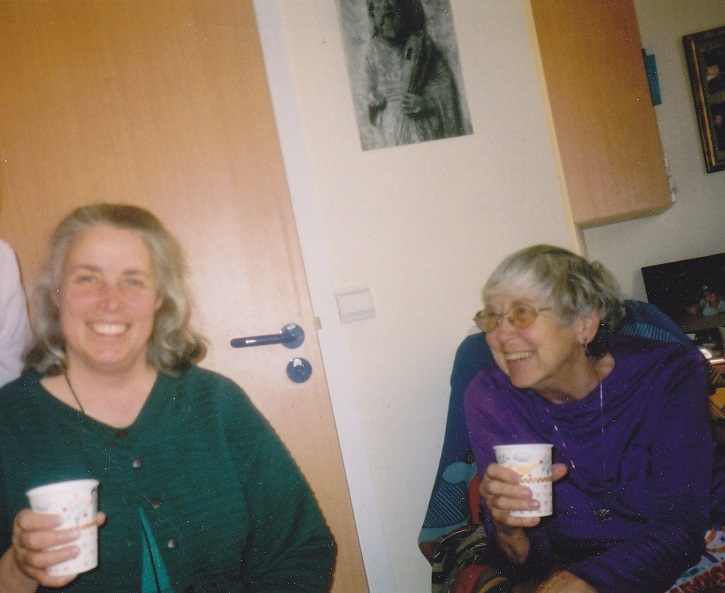 Harriet Crain Blume, 85, passed away peacefully just as the lunar eclipse was ending on the morning of January 31, 2018. She spent her final days at her daughter Margaret’s home in Monterey, California, with all four of her children around her.

Harriet’s life was a testimony to her deeply felt Quaker values of peace, integrity, equality, simplicity, community, and stewardship of the earth. She sought and found the inner light of good in all people, and her warm and genuine smile raised the spirits of all who knew her.

She loved music, particularly Mozart and Chopin, but also jazz, and anything else she could dance to or play on the piano. She was curious and always open to anything new: new recipes (she rarely cooked the same thing twice); new places to visit, including China, Australia, Russia, Chile, and Antarctica; and most of all, chance encounters with new and interesting people.

She was born February 8, 1932 to Rufus B. and Elizabeth Wickes Crain in Rochester, NY. In childhood, she enjoyed climbing the big oak tree in her back yard, riding her horse Billy, playing with her sister Cynthia Crain Stokes (now of Minneapolis, MN), and looking up to her big brothers, Richard and William Crain.

She attended Oberlin College in Ohio, where she earned a BA in sociology in 1953. During her junior year, she spent a semester at Fisk University in Nashville, TN, part of a lifelong devotion to civil rights, equal rights, and justice. It was also during her time at Oberlin that she joined the Society of Friends, or Quakers.

In 1951, she spent the summer living in Burgundy, France, which ignited a lifelong love of all things French. She returned in 1954, staying 2 years in Paris, where she worked as an au pair, earned a master’s degree in French at the Sorbonne University, and worked for the Paris Review. The deep friendships she formed during this time with a small group of French artists and writers lasted throughout her life.

She came back to the U.S. in 1956 to live with her sister in Cambridge, MA. There, she ran into an acquaintance from her college days, Frank Blume. They fell in love and married in 1957. Together, they moved to California, living in San Bernardino and Claremont, before settling in Redlands in 1966. They raised four children together, Walter of Edwardsville, Illinois; Margaret of Monterey, CA; Daniel of Paris, France; and Antonia of Seattle, Washington. The couple remained together until Frank’s death in 1998, and Harriet lived on in her Redlands home until moving to Pacific Grove in 2016 to be nearer to her daughter Margaret.

Harriet taught French part-time before earning a second master’s degree in English literature at the University of Redlands in 1973. She then became a full-time professor, enjoying a long and successful career teaching French, English Composition, and German at Crafton Hills College, as well as classes at San Bernardino Valley College and the University of Redlands. After retirement, she continued to tutor students privately in French, ESL, literacy, and piano. She also did a wide variety of volunteer work, among other things, working with the homeless, and helping to lead a meditation group with prison inmates.

Harriet is survived by her four children; her sister Cynthia; sons-in-law William Hopkins of Monterey, and Jake London of Seattle; daughters-in-law Maried Blume of Edwardsville, and Valerie Blume Socroun of Paris; and her six grandchildren: Marcel and Renny Blume of St. Louis, MO; Emily Hopkins of Seattle; Stella Hopkins of Monterey; and Lia Shriki and Elodie Blume of Paris.

A Quaker celebration of life is planned for Harriet on Saturday, March 10, at 5 pm at the Unitarian Universalist Church in Carmel, California.

In lieu of flowers, donations may be made in Harriet’s name to promote the causes of peace and justice at the American Friends Service Committee at ttps://www.afsc.org/ or Nonviolent Peaceforce http://www.nonviolentpeaceforce.org/.