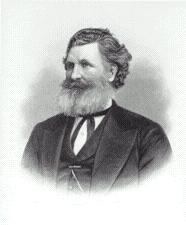 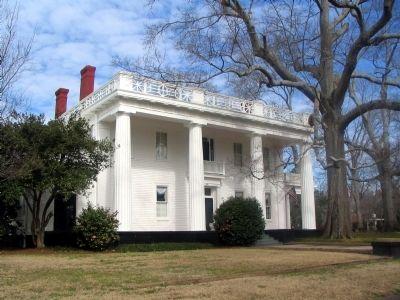 Senator Joshua Hill (1812-1891),"A Staunch Southern Friend of the Union"
and Hill House in Georgia (picture courtesy of his descendants)
JOSHUA HILL 1763-1855

I have these children for Joshua Hill & Nancy Wyatt Collier:

9. Martha Ann Hill, was born on the 1st of September 1807. She married first to Alexander Reid Buchanan and second to John Bruce.

He was tutored and later self-taught for the practice of law. 1848, soon after moving to Madison, in Georgia, he turned to politics and 1857 was elected by the American party to the 35th and 36th Congresses, serving until 1861 when he resigned. 1860 he was a delegate to the Constitutional Union Convention at Baltimore, Md. and took part in discussions about how to avoid the impending war. When Abraham Lincoln was elected President in 1860, Hill began a vocal campaign against GA's secession from the Union. He was an outspoken opponent of session and refused to sign the letter confirming Georgia's secession; he flatly refused to have anything to do with the war. 1863, supported by a growing Union sentiment in northern part of Georgia, he ran for governor, but lost the election to Joseph E. Brown.

During the War between the states he remained ardent in his defense of the Union. At the urging of Lincoln and William T. Sherman, he even tried to negotiate an end to the war. Despite his pro-union efforts, Hill remained very popular in GA. During Reconstruction, Hill, a lawyer, filled some of the state's most important political jobs. and he helped to write its new Constitution. On 10 May 1865 he addressed a temperate letter to President Andrew Johnson on the subject of Reconstruction.

At the close of the war Joshua Hill was elected to the state constitutional convention and, 1866, under the new constitution, ran unsuccessfully for United States Senate. 1868,however, conservative Democrats gave him their support and he was able to defeat Joseph E. Brown for that office. Immediately after being elected, he voiced his Republican principals in support of the policies of Congress. After he went to the Senate in 1868, he formed a friendship with President Ulysses S. Grant, a relationship that historians say resulted in a gradual reduction of the government sanctions levied against GA during Reconstruction. 1873, he resigned from the Senate and returned home to Madison, Georgia and remained politically inactive, except for his activities in the state constitutional convention. Despite the fact that he opposed secession, during the war he led a peace movement, later joined the Republican party and worked for radical reconstruction policies. He never lost respect people of Georgia.

The contributions Hill made in the Senate seem scant. One history book cites as his only accomplishment a deal he struck deeding the US Mint Offices in in Dahlonega to fledging north GA Agricultural College. He was an atheist and at one time a member of the Know-Nothing Party. However, he was well thought of enough by his peers to have been memorialized after his death in the Minutes of Morgan Co., Superior court in the Sept. 1891 term.

Descendent of Joshua Hill, John Hill of Tokyo, Japan sent me this article from a newspaper of Augusta, Georgia dated Sunday Morning, November 9 1980.

"Georgia's GOP Senate legacy isn't too long, but is colorful" by Charles Campbell

When Joshua Hill's term in the U.S. Senate expired on March 4, 1873, he went home to Madison, Ga. and retired from politics. For Georgia Republicans, it was the beginning of a long, long wait.

If Mack Mattingly's victory Tuesday does not turn to defeat in a recount, the 49-year old former computer salesman will become only the second Republican from Georgia ever to serve in the Senate. And he will be heir to Joshua Hill's legacy.

Hill, a bushy-bearded man with flowing dark hair, was something of a peacenik. He opposed secession while a member of the U.S. House in the 1850s, campaigned against the war a s a candidate for governor in 1863 and supported Reconstruction measures that were despised by other Georgians.

Moreover, Hill was an atheist. But somehow, he managed to retain the respect and the admiration, perhaps grudging of his fellow Georgians. Mattingly's triumph last week was cheered heartily by his supporters. But the victory celebrations did not compare to the reaction to Hill's election in July 1868 by the state Legislature, as recorded by contemporary historian I. W. Avery.

"The city of Atlanta became delirious with excitement and congratulations," Avery wrote. "Buildings were illuminated that night, and bonfires made."

But the enthusiam, it turned out, had less to do with approval for Hill, then 56, than with the intense distaste Georgia Democrats had for his opponent, four-term governor Joseph E. Brown.

Brown was a stalwart champion of the Confederacy during the war. but his unleashed a firestorm of criticism by counseling acquiescence with Reconstruction decrees, becoming in an instant the most hated man in the state.

Thus the Democrat-dominated Legislature --which picked the state's envoys to Washington in those days-- chose Hill as the lesser of two evils, passing over his reputation as, in Avery's words, "an original and incurable Republican, and the uncompromising opponent of the war Democracy."

But Hill was not able to claim his seat for more than two years, because the same legislators who elected him proceeded to incur the wrath of Congress by declaring blacks ineligible to serve in their halls. All 27 black state lawmakers were expelled and replaced by whites.

The expulsion became a national sensation. Congress decided that Georgia did not deserve representation in the U.S. Senate, so Hill and his fellow senator-elect, Homer Miller, were not seated until January 1871 after the fuss died down.

By then, only 26 months remained of this term, and Hill made little mark on the Senate.

Michael Ortiz Hill found the following on the internet. It was surely written by one of the Senator's slaves.

"My parents were slaves on the plantation of John H. Hill, a slave owner in Madison, Georgia. I wuz born on May 21, 1855. I wuz owned and kept by J. H. Hill until just befo' surrender. I wuz a small boy when Sherman left here at the fall of Atlanta. He come through Madison on his march to the sea and we chillun hung out on the front fence from early morning 'til late in the evening, watching the soldiers go by. It took most of the day.

"My master wuz a Senator from Georgia, 'lected on the Whig ticket. He served two terms in Washington as Senator. His wife, our mistress, had charge of the slaves and plantation. She never seemed to like the idea of having slaves. Of course, I never heard her say she didn't want them but she wuz the one to free the slaves on the place befo' surrender. Since that I've felt she didn't want them in the first place. ...

The next week after Sherman passed through Madison, Miss Emily called the five ... wimmen ... women ... that wuz on the place and tole them to stay 'round the house and attend to things as they had always done until their husbands come back. She said they were free and could go wherever they wanted to. See ... she decided this befo surrender and tole them they could keep up just as befo' until their husbands could look after a place for them to stay. She meant that they could rent from her if they wanted to. In that number of ... wimmen ... women ... wuz my mother, Ellen, who worked as a seamstress for Mrs. Hill. The other ... wimmen ... women ... wuz aunt Lizzie and aunt Dinah, the washer- ...wimmen ... women ... , aunt Liza ... a seamstress to help my mother, and aunt Caroline ... the nurse for Miss Emily's chilluns.

"I never worked as a slave because I wuzn't ole 'nough. In 1864, when I wuz about nine years ole they sent me on a trial visit to the plantation to give me an idea of what I had to do some day.

{Begin page no. 2}
The place I'm talkin' about, when I wuz sent for the tryout, wuz on the outskirts of town. It wuz a house where they sent chilluns out ole 'nough to work for a sort of trainin'. I guess you'd call it the trainin' period. When the chilluns wuz near ten years ole they had this week's trial to get them used to the work they'd have to do when they reached ten years. At the age of ten years they wuz then sent to the field to work. They'd chop, hoe, pick cotton ... and pull fodder, corn, or anything else to be done on the plantation. I stayed at the place a whole week and wuz brought home on Saturday. That week's work showed me what I wuz to do when I wuz ten years ole. Well, this wuz just befo Sherman's march from Atlanta to the sea and I never got a chance to go to the plantation to work agin, for Miss Emily freed all on her place and soon after that we wuz emancipated.

"The soldiers I mentioned while ago that passed with Sherman carried provisions, hams, shoulders, meal, flour ... and other food. They had their cooks and other servants. I 'member seeing a woman in that crowd of servants. She had a baby in her arms. She hollered at us Chillun and said, 'You chilluns git off dat fence and go learn yore ABC's.' I thought she wuz crazy telling us that ... for we had never been 'lowed to learn nothing at all like reading a writing. I learned but it wuz after surrender and I wuz over tens years ole.

"It wuz soon after the soldiers passed with Sherman that Miss Emily called in all the ... wimmen ... women ... servants and told them they could take their chillun ... to the cabin and stay there until after the war. My father, George, had gone with Josh Hill, a son of Miss Emily's to wait on him. She told my mother to take us to that cabin until a place could be made for us.

"I said I wuz born a slave but I wuz too young to know much about slavery. I wuz the property of the Hill family from 1855 to 1865, when freedom wuz declared and they said we wuz free. ...