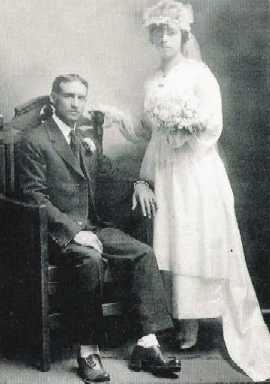 In his oral history published on Rancho Pancho, Lourdes' brother Frank remembers his brother-in-law: "My other sister Lourdes married a Howland. And he was printer and they moved over to Albuquerque. So, I had two my brothers-in-law there. I was in clover then because I could shift from one to the other.... So, this fellow Howland was a printer and he used to print all those flyers and stuff like that.... This fellow Howland was very good, you know, at typing all those things in Spanish. Well, before I knew it I went ahead and bought a Ford, a Model T. It was all stripped and we had a box in the back there. 'Well,' he said, 'I'll tell you what we'll do.' We'll print all these flyers and sales and stuff like that and we can go out and deliver it. We were delivering them in English. I told him, 'Why don't we deliver them in Spanish?' I said, 'Well, hell yes.' We started out delivering them in Spanish. That was big. I used to go up and down and delivered them in Spanish out to Central, Old Town, in Cerritos up here and all over. We got in my Ford, you know. It had tires with seventy pounds pressure and we had blow outs all over the place. But we could fix them right on the spot, get right down there."

An archival report dated April 14, 2006 about the property Lourdes inherited and where her heirs still live gives information on their lives and helps confirms the thesis that Lourdes' mother Alcaria's parents were Mathiana Ortega and Ramon Valencia. This is the house where Alcaria died and Adelina Ortiz was born.

The report cites Mrs Howland (Lourdes' daughter Josina) as stating that she thought that the house where she lives was built by her grandfather Francisco Ortiz sometime before 1900. According to the report, the first map showing the residence is the 1912 King's Map, which shows the house owned by Francisco and Alcaria. It also shows the units in the compound as belonging to Roman Carrillo, Mrs. Rita Martinez de Gooch, Francisco Rivera, Francisco Ortiz and Juanita Chavez. "Mrs. Howland stated that her grandmother gave or sold the house and garden lots to her mother, Lourdes Ortiz Howland, after the 1924 death of Lourde's husband, James G. Howland.... The River Improvement map shows that the property was owned by F.V. Ortiz as late as 1929 though the County deed records have no deed for a change in ownership. Mrs Howland said that Frank V. Ortiz was her uncle, a school teacher.... The properties on which the house was located were eventually deeded to Josina Trujillo, who at some time after 1960 began to use her given last name of Howland...."

"In the interview with the author, Mrs Howland stated that she grew up in the house. She did not remember what her grandfather did, stating that he sometimes worked for the Callahans, a rich neighbor. Her mother and her father lived on Canyon Road until his death in 1924. They lived next to Manderfield School, selling the property to Olive Rush. (SFCD, Book V-MS, p. 539.) Her mother bought from or was given the subject property by Alcaria Ortiz. Lourdes Howland added two rooms on the south side of the house and the second story to the structure now used as an apartment. She also built the additional two apartment units on the property. Mrs Howland said that her family always used water from the well and that it tasted really good. Her mother would use the well when she made jello, put the jello in a container on a rope and lowering it into the well so that it could cool off. "

"In regard to the river, Mrs. Howland said that kids would come and swim in the river. They would use rocks to dam it up, apparently above the Delgado Bridge. She remembers the river flooding, but not when. She said that her mother had a new garbage can and that the water floated it away. The river came up to the door of the house."

"Mrs Howland stated that her family was poor but that then things weren't so expensive. Once her mother gave her 25 cents to go to Pacheco's store by the capitol building to buy a big steak. Her mother raised chickens in the chicken coop in front of the house. They would have chicken for Sunday dinner. They would also have corn, lettuce and other vegetables from the garden in front of the house that was watered by the acequia.""

"Joe Maesta stated that he had lived in the house on Delgado Street which was attached to the Howland house on the west. His wife's grandmother was a Barbero, as sister to the Alcaria Barbero de Ortiz, grandmother of Josina Howland. He remembers hearing that Eduardo Tafoya, who lived on the corner south of him, bought the property from Mrs. Gooch. Tafoya was a World War I veteran who had been gassed and did not live long after he returned to New Mexico. (PC April 3, 20, 2006)."

".... the 1919 report from the Hydrographical Report from the State Engineer showing that Francisco Ortiz had irrigated 5,660 square feet of land for gardens or alfafa with a remaining 2,740 square feet of land on his lot which could not be cultivated.... This is supported by comments from Mrs Howland who stated that her mother raised corn, lettuce, and other vegetables in the yeard in front of the hourse, irrigated by the water from the ditch...."

I also have a death certificate for a Dolores Howland (1911-1920) of Canyon Rd in Santa Fe, which says that her father was John G. Howland and her mother Manuelita Martinez.

Juan Howland died in 1924. According John G. Howland's death certificate, he was born on April 23, 1883 in Santa Fe. His father was J. Cain born in Illinois and his mother Petrita Howland born in Santa Fe. He was male, white and married to Lourdes Howland and lived on Delgado Street in Santa Fe. He was a printer for the Gallup Evening Herald. He died at the age of 40 years, 11 months, and 14 days in Gallup at 1:30 pm on April 7, 1924 of a tumor of the cerebellum and was buried in National Cemetery on April 9, 1924. Mrs Lourdes Howland was the informant.

Lourdes Ortiz Howland is buried in National Cemetery. The dates on her gravestone are June 12, 1893-March 1, 1957.

I have this obituary (year 2005) for one of their descendents: Rosary Slated for J. Howland. Rosary services for the father of four Santa Fe residents, John Larkin Howland, 39, of Albuquerque, will be conducted tonight at Sanchez Funeral Home Chapel. Howland, a hit-run victim in Albuquerque, died Saturday night. He was a native of Santa Fe. Funeral services will be Wednesday at 9 am at St. Francis Cathedral. Burial will be in Santa Fe National Cemetery with military honors. Howland's body was found by a passing motorist Saturday night in the 7500 block of West Central in Albuquerque. A coroner's investigation showed he was struck by a vehicle. A 23 year old Albuquerque man is being held for questioning in the hit-run death. Although he had not been charged late Monday night, Albuquerque police described him a a "good suspect". Police said hair and blood stains were found on the front of a pickup belonging to the suspect. Survivors include three sons, Henry, Leroy, and Joseph and a daughter, Gloria, all of Santa Fe; three sisters, Mrs. Josina Miera of Santa Fe, Mrs. Janet Montoya and Mrs. George L. Stanley, both of Albuquerque.