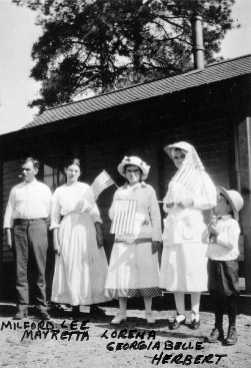 Milford Lee, May Retta and three of their children, Lorena, Georgia Belle and Herbert

Milford Lee Nichols was born on October 5, 1877 in Guadalupe, Seguin Co., Texas. His parents were Milford Riley Nichols (who was born in February 9, 1851, died on April 14, 1897 and is buried in the cemetery outside of Post, Texas), and Isabel Sowell (who was born February 9, 1859. She died November 24, 1949 in Post (Verbena) and is buried in the Terrace Cemetery, Post, Garza Co., TX.) They married on November 14, 1876. These were old Texas families who had come there to settle in the early 19th century. The origins back into the 18th century are recounted on the page devoted to the Nichols Family Genealogy. This is a picture of Milford Riley Nichols. There are stories of Isabel in the pages of the journal kept by her daughter Georgia Belle Nichols. She was still living in the 1920s.

Milford Lee Nichols had nine brothers and sisters, seven of whom survived. The names I have are: Pleamon Y.; Ethel; Norman Rae; John S.; Iona; Claire; Mabel; Henrietta; Claud. There is more about this family on the Nichols genealogy page.

Milford Lee Nichols married May Retta Lester in about 1900. She was born on November 7, 1881 in West Plains, Howell Co., Missouri. Her father was James R. B. Lester and her mother Maretta Georgiana Mitchell. The Lesters were from Kentucky and before that Virginia. May Retta's ancestry has been traced by Marty back to the 18th century. He did all the lines!

According to Billie Nichols-Bennett, after the death of Milford Riley Nichols, his family moved to a place near Weatherford, TX. Pleamon went to that country about 1898 and worked for the XIT Ranch and the Spur Ranch. In 1901, Isabel Graham Sowell-Nichols and her sister, Iona, and a brother Claud and daughter Henrietta went by train to Colorado City. Henrietta stated that she did not remember the trip, only getting off the train onto a platform, and a house with nothing but a floor made a deep impression on her. Milford Lee Nichols had married and had one son, and Ethel had married at Weatherford, TX. They with John and Rae, had driven a few cattle and went through in a wagon, taking a month to make the trip. In the Spring of 1902, Milford (Mittie Lee) taught school in a dugout at South Camp, a camp of the Spur Ranch, where the Smithers family lived (Isabel's sister). He taught three Smithers children, two Stagner children, and Rae, John and Iona. Milford had attended a regular school in Parker County.

For the most complete story of Milford's and Mayretta's family life see their daughter Georgia Belle's account of her youth.

According to Dale Nichols: Milford Lee Nichols took a forest job and moved with his family to Metcalf, Arizona in the early part of the century. Metcalf is now under tons of mine tailings. It was located at the foot of the mountain outside of Clifton, Arizona. Milford was the Ranger and the law. Lola Mae Jenkins, Georgia Belle's daughter, comments that Milford worked in Clifton, Arizona for a mining company from 1903-1905 --then moved to Coronado (1906) and was in charge of the company store.

Rae and his sister Ethel followed Milford to Arizona. Norman Rae spoke Spanish and was the foreman at the Mine and was deputized by Milford to uphold the law. Now Norman Rae Nichols married, a sister of May Retta Lester and Ethel Nichols married Ruben Lyn Lester, a brother of May Retta. So we have three Nichols siblings married to three Lester siblings. Ethel Nichols Lester died at Metcalf on February 12, 1912. Most of the Nichols and Lesters were Southern Baptist.

According to his death certificate, he was a Ranger for the U. S. Forest Service who had resided at the Knob Hill Ranger Station in Flagstaff, where he had resided for either 2 years (hard to read). He died of lobar pneumonia on September 19, 1923 at 11:45 pm. The physician who signed the death certificate attended him from the 12th to the 19th of September. He was male, white, married to Maretta Nichols and born on October 5, 1878 in Seguin, Texas to Milford R. Nichols born in Texas and Isabel Sowel born in Texas. The informant was Mrs. M. L. Nichols. He was buried in Flagstaff on September 21, 1923.

May Retta's and Milford Lee Nichols' children were:

Roland Leon, born November 11, 1900 in Weatherford, Parker Co., Texas. He married Mary Comstock in Los Angeles, California and died September 27, 1968 in North Hollywood, California.Their children: Carol Rae Nichols Cox and Gary Nichols, who died in the 70s in the Sylmar Tunnel disaster. Gary was working with a crew drilling and whatever they do to cut a tunnel through the mountains above Los Angeles. His crew was deep inside the tunnel when they hit a methane (natural gas) pocket, which exploded and killed several workers and Gary was one of them. There were several write ups in the Los Angeles area newspapers. The accident occurred June 24, 1971.

Lorena Geneva, born March 16, 1902 in Snyder, Curry Co. Texas. However her Bible says she was born in Verbena, Garza County. She married Herbert Bradford Hill on September 23, 1923. In June 1943, she married Gail Berrif in Alamogordo. On March 17, 1950, she married Clifford Milton Miller, who was born on November 16, 1893 and died in Truth or Consequences on February 24, 1972. She married Lawrence Tidwell in 1977. She died on July 10, 1982, in Truth or Consequences, Sierra Co. NM and Lawrence Tidwell died three months later. Her story is documented on the page devoted to her and Herbert.

Georgia Belle, born February 27, 1905, Rodney, Van Zandt Co., Texas. We always called her Aunt Doddie. She married Jack Johnson and died on August 27, 1992 in Arizona. He died in January 1966. Their child was Lola Mae Jenkins, to whom I am now grateful to for help with facts and pictures. The pages from Georgia Belle's journal on the page devoted to her tell about her childhood, parents and brothers and sisters.

Herbert Lee, born July 6, 1910, Metcalf, Graham Co., Arizona. According to his birth certificate his father was 32 years old, born in Texas and a grocery clerk. His mother was 28, born in Texas and a Housewife. He was the 6th child of his parents, of which 5 were living.