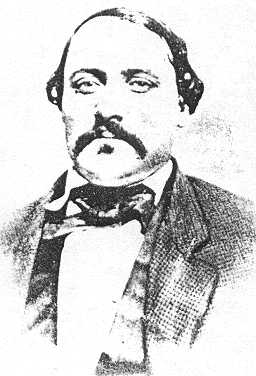 Pablo was the son of Manuel Salustiano Delgado and Maria de la Luz Baca. His siblings who survived to adulthood were Josefa, Simon, Fernando, Felipe S., Estefana and Felipe B. Delgado.

He was baptized José Pablo on March 24, 1822 (godparents Pedro Pino and Maria Baca) according to the Santa Fe baptisms book, but I have always heard him called Juan Pablo or Pablo. He first married Irenea Nolan and then widowed, Trinidad Lucero. He died in July 1873.

Upon Pablo's death the newspapers carried a most enthusiastic account of his life. The Daily New Mexican for Tuesday July 8, 1873 reads:

As announced in our issue of yesterday, the funeral of don Pablo Delgado took place this morning. All last night the body laid in a black suit, on a neatly devised altar to give his numerous friends and acquaintances an opportunity to view his familiar features for the last time. Hundreds took advantage of the privilege; during the whole night crowds were passing in and out, and at no hour were there less than one hundred persons present. At 6 1/2 o'clock this morning the funeral procession formed and marched to the Catholic Cathedral, where the most impressive ceremonies were performed, before an immense audience of citizens and mourners. From thence the procession headed by a father of the church, proceeded to the Rosario graveyard where the body was let down to its last resting place. Notwithstanding the long road, the heat and the dust, the gathering at the grave, composed of our best and most respectable citizens, was one of the largest we ever witnessed and is the best compliment that could be paid to his memory.

Don Pablo was born in Los Serrillos, or what is known as the Delgado Rancho, on the 19th of March 1822, and is therefore a little over 51 of age. The family to which he belonged is one of the oldest, wealthiest and most influential in the Territory. Their residence dates back over two hundred years and their history is one of influence and power. His first ancestor to this country was Don Manuel Delgado, who was sent hither as a Captain under the Spanish government. The intelligence, energy and shrewdness of that great commander has been the birthright of the family ever since. They married and intermarried with other powerful families until their connections and relations bound together the four points of the compass, and at no time in their history have they failed to hold some of the reins of government. The last father left five sons who grew up in the good soil of the past and detracted nothing from the illustrious name which they bore. About six years ago, death laid his clammy hand on one of these brothers --Don Simon Delgado-- whom many of our citizens recall with the fondest recollections for his sterling worth as a citizen; for his valuable influence as a prominent politician and for his integrity and affability as an accomplished gentleman. Death again has thrust his hand among the brothers and torn another great branch from the sturdy tree --it fell upon the respected, the lamented Don Pablo; and but three are left to moisten with brother's tears, the dust that hides him forever.

Under the Mexican rule his genius was recognized as promising, but his youth forestalled promotion. It was not until the United States took possession of the country, that his abilities were put to public use and his importance felt. From that time to the present, his influence has been felt and courted. As a legislator, he won a reputation for sagacity and statesmanship, and as Treasurer of the Territory, he exhibited a financial ability that is seldom equaled. As a respectable, influential, important and valuable citizen, we cannot say too much of him. No man stood higher in the estimates of his fellow men than he. No name is all Santa Fe, was oftener in the mouths of good men than his name. No record of a public officer is clearer than his; and no character as a man is purer than Don Pablo's. To lose such a man in the meridian of his years, is a loss to the people and the state that claim him; but death asks neither people nor states, questions. While we regret and the whole country will regret, that he has been taken from us, we cannot refrain from saying that our deepest feeling will be one of sympathy for the bereaved widow and the seven little children that he leaves behind him to fight the world without a husband and a father. May a find Providence take care of these, and may the name of Don Pablo, linked with Don Simon, be ever revered and honored his good deeds they undersign."

First he married Irenea Nolan (daughter of Maria Dolores Lalande and Gervasio Nolan, said to be one of a large group of French-Canadian fur trappers in the Taos area).

Homer Milford informs me: "Here is another Real de Tuerto connection and is a second child of Manuel S's who marriage the daughter of a resident of Tuerto. So Manuel's sons must have spent a lot of time there. "I rode there with Mr. Nolan, a French resident of new Placer [Tuerto]." (Wislizenus journal entry of July 10, 1846 or page 31-32 or the Calvin Horn 1969 reprint of his book).

Martina (born November 11, 1847 in El Placer) married Francisco Crestino Cabeza de Baca (born October 4, 1839 in Pena Blanca) in Santa Fe on April 16, 1865. According to the Santa Fe baptisms book on November 25, 1847, Pablo and Irenea baptized Maria Manuela. This is assumed to be the same person as Martina. In his A Genealogy Record of the Cabeza de Baca Family of New Mexico, George Cabeza de Baca lists 13 children for them:

Trinidad was born in October 1836 to Mariano Lucero and Maria Guadalupe Rivera in San Juan de los Caballeros on September 21, 1850.

According to the book of New Mexico Marriages in the Church in San Juan Pueblo, p. 49, on September 21, 1850 Paublo Delgado, widower of Erinea Nolan, of Santa Fee married Maria Trinidad Lusero, single daughter of Mariano Lusero and Guadalupe Ribera of San Juan.

His home was on College Street, across from St. Michael's High School.

Juan Delgado y Lucero, born in Santa Fe on August 29, 1853, married Modesta Lopez (daughter of Francisco Lopez and sister of Epimenia) on May 16, 1877 at San Ysidro Labrador de Chaperito (LDS Film 190437) (the same day and place as his brother married her sister).
Adolfo, According to Bautismos de San Ysidro Labrador de Chaperito LDS Film 190437, p. 49, he was born on December 11, 1886 and baptized on December 18, 1886.
Rumalda, confirmed at Our Lady of Sorrows parish in Las Vegas in September 1899. Her sponsor was Sola Baca.
Miguel, According to Bautismos de San Ysidro Labrador de Chaperito LDS Film 190437, p. 219, he was born on May 8, 1890 and baptized on July 12, 1890. His godparents were Francisco Lopez and Felipa Delgado.
Felipe, went to Hollywood and became a singer in movies. Las Vegas on the Gallinas 1835-1985 by Anselmo F. Arellano and Julian Josue Vigil has a picture of him, Epimenia, Eugenia, Lorenzo, Francisco, Fidel D., Rumalda and Adolfo in December 1927 (on p. 60). There is a picture of him in his Hollywood days and the text of one of the songs he used to sing on pp. 132-33. His obituary from The Mora County Star for May 9, 1940 is cited. According to it the New Mexican artist was born in Las Vegas in 1902, the son of Felipe Delgado III and Epimenia Lopez (de Delgado). He attended public schools and graduated from the Normal University in Las Vegas, where he studied music and art; and served as deputy collector for the Internal Revenue Service before departing from the state in 1923. In California he studied dance with Ted Shawn, continued his musical studies ("recibio ensayo de concierto"), and shortly afterwards appeared in his own programs. In the years prior to his death, Delgado toured the Southwest, Mexico, and Latin American, presenting a program of foloksongs which he had developed; likewise he appeared in various musical programs on radio station KFI, Los Angeles, and several times was the singing star in different Hollywood movies. His untimely death prevented his planned participation in observing the Coronado Cuarto Centennial that summer.

I have obtained his death certificate from Los Angeles County. According to it, he was single, born in Las Vegas, New Mexico to Phillipe Delgado, born in Las Vegas and Epminia Lopez, born in Las Vegas on August 30, 1902. His usual occupation was given as singer in the opera singing business. His usual residence was 6813 W. 3rd St. in Los Angeles. He had lived in this community for 16 years and in California for the same amount of time. He died at Los Angeles County General Hospital on May 7, 1940 at 4 am of Pneumococic Meningitis Type III due to Rt otitis mdeia and mastoiditis. The major finding of an operation on April 16, 1940 was necrosis of mastoid cell walls with pus (can't read the rest). He had been in the hospital for 22 days. He was taken for burial to Las Vegas. Jack Benz of 1024 So. Western Ave. was the informant.

Tony Delgado, who died on August 2, 1924 in Parkview, San Miguel County. He was male, white and single and born on May 10, 1904. He was 20 years old and 2 months at the time of his death. He had no occupation. He was born in Las Vegas. His father was Felipe Delgado born in Santa Fe and Epimenia Lopez born in Las Vegas. The informant was Rumaldo Delgado of Las Vegas. There was no doctor and it is said that he "Died at Parkview while in a spell --one of which he was afflicted with, probably epilepsy. District Attys Office notified and no inquiry deemed necessary. Witnesses to death." He was buried in Mount Calvary.

I have a death certificate for Mrs. Epimenia Delgado, widow of Felipe Delgado. According to it she was born March 21, 1860 to Francisco Lopez of Agua Fria and Petra Baca of San Miguel. She died at home at 202 Blvd. in Las Vegas on March 25, 1933 at 9:55 pm of chronic nephritis, that had begun 2 years earlier. She was a housewife and had worked at that profession for 56 years. She was buried in Mount Calvary cemetery on March 28, 1933. The informant was Lorenzo Delgado.

I have a death certificate that I have for a Juan Pablo Delgado, a single clerk from Santa Fe, who died at the New Mexico Insane Asylum from an 4 month old abcess of crania?, contributory Otitis media, duration of 10 years, was the 2 year old boy of the above census. He died on April 9, 1921 at the age of 42 years, 6 months and 6 days. His father was Juan Delgado. His mother's name wasn't given.

Carlos Arturo Armijo, son of Judge Luis Enrique Armijo and Eugenia Delgado, daughter of Felipe Delgado and Epeminia Lopez (all of Las Vegas) died in Cabanatuan prisoner of war camp in the Philippine Islands during WWII. Carlos had been a member of New Mexico's 200th Coast Artillery, sent to the Philippines in September 1941.