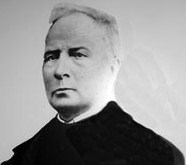 According to "El Paseño Padre, Ramon Ortiz: 1814-1896," Password, vol. 44, no. 3, Fall 1999, (pp. 107-121) written by Samuel E. Sisneros, "Padre Ramon Ortiz's life began in the serene hillsides below the Sangre de Cristo mountains in Santa Fe, the capital of the Spanish province of New Mexico.... In the papers describing his ordination, the Vicar of Santa Fe, the Most Reverend Juan Felipe Ortiz, certifies that 'according to public knowledge' Padre Ramon Ortiz was born on Janaury 28, 1814 to don Antonio Ortiz and doña Teresa Miera.... He was the last son born into a family of eleven children.... Padre Juan Felipe Ortiz, Ramon's third cousin, reveals in his letter that Ramon's godparents were the Lieutenant Colonel don José Manrique, Governor of New Mexico (1808-1814) and his wife doña Inez Tellez.

According to Forty Years at El Paso 1858-1898, by W. W. Mills (El Paso, Texas: Carl Hertzog, 1962), p. 186, "Ramon Ortiz, son of Antonio Ortiz and Maria Teresa Miera of Santa Fé, New Mexico, was born in 1813, the youngest child in a large family. He was educated in the seminario at Durango and after an effort to transfer to a military career he attended to his studies for the priesthood. He became the cura at the Mission Nuestra Señora de Guadalupe in January 1939 and served in that capacity until his death March 11, 1896. Few residents of the border were better known or more widely noted than Ramon Ortiz. Kendall remembered his acts of kindness to the Texan captives of the Santa Fé Expedition; he was a member of the Congress of the Republic of Mexico in 1848; he sought to alleviate the ill-feelings engendered by the Salt War of 1877. His home in El Paso del Norte was the center of the city's social life: he reared the children of his niece Josefa Delgado de Samaniego, especially of note was Dr. Mariano Samaniego. Father Ortiz' cenotaph is in the cemetery of San José three miles below Juarez on the Chihuahua road."

In "El Paseño, Padre Ramon Ortiz", Password, 44, no. 33, Fall 1999, Samuel Sisneros writes that once assigned to the Parish of Nuestra Señora de Guadalupe in El Paso in 1838, Padre Ortiz "began his life-long commitment to serve the valley of El Paso del Norte. His pastoral work paralleled his successes as a statesman and humanitarian. Padre Ortiz took residence not in the central dstrict of El Paso del Norte but rather a few miles down the river at Chamizal.... It was there that Padre Ramon began his double role of entrepreneur and charitable prist. He established a large home complete with a dam and mill, which was in use up until 1865.... Ramon's home... spacious and comfortable.... was the alrgest in the area, complete with guest bedrooms and large patios. It was surrounded by orchards, vineyards and corrals, which covered several acres.... Padre Ramon sent for his sisters, doña Ana Maria and doña Rosario from Santa Fe. Once they were settled he made the dangerous trip... to Sonora to rescued his widowed niece Josefa Delgado and her Samaniego children from a recent attack by Apaches. And thus was established in the Paso del Norte area the well-known Samaniego family" (pp. 111-12).

The Pass of the North, Four Centuries on the Rio Grande, by C. L. Sonnichsen (El Paso TX: Texas Western Press, 1968) recounts how Father Ramon received the "forlorn and dejected group of Anglo prisoners" who had survived the Texas-Santa Fe expedition: "He could not take care of all 180 prisoners personally, but he did everything he could, and his household was busy for days making shirts and underwear, cooking uncounted meals and heating water for uncounted baths. An unusual friendship sprang up between the priest and a prisoner named George Wilkins Kendall, co-founder of the New Orleans Picayune, who had joined the group in order to report its activities. Kendall was a lively and talented young man who responded to the real nobility of the young priest's character, and Ortiz was just as much drawn to the young journalist. 'Seldom,' said Kendall, in the book which carried the story of these events all over the world, 'have I parted from a friend with more real regret than with Ortiz, and as I shook him by the hand for the last time, and bade him perhaps an eternal adieu, I thought if ever a noble heart beat in man it was in the breast of this young, generous and liberal priest.'" (p. 108)

Father Ramon was less welcoming to Colonel Doniphan: "The only man among the top citizens who was less than cordial was Ramon Ortiz, the cura. Father Ortiz was a notable patriot who could not bring himself to regard the invasion of his country with patience though he was able and willing to love his enemies, as he had shown on the occasion of the visit of the Santa Fe Expedition prisoners in 1841. He refused to give lip service to Doniphan, and the Colonel had him confined lest he organize the opposition to American control. In fact, Doniphan took him along as a hostage when he eventually took the road to Chihuahua, letting it be known that any hostile movement would result in the death of the beloved priest." (pp. 118-19)

In Down the Santa Fe Trail, Susan Shelby Magoffin provides an eye-witness account of Father Ramon Ortiz's household in El Paso. On Tuesday, February 16, 1847, she took up residence at el Señor Cura's house. She had been invited to live there and the house had been especially prepared. They stayed until March 14th.

On February 17th, she writes from the Casa del Señor Cura: "Agreeable to our arrangements we moved our boarding last evening to this the residence of the Priest, who is now a prisoner in the hands of Col. Doniphan, though I hope for no bad end. So far I find the family exceedingly kind and attentive. The affairs are in the hands of his two sisters Doña Anna Maria, a widow lady, and Doña Rosalita, Doña Anna's daughter, Doña Josafa, with her three children compose the family. Doña Anna Maria... is good & kind and seems to have rather the principal management, bears the name of a favorite in the village, she is a mui Senora in my estimation. How much I am struck with their manner of rearing children. The little daughter of Doña Josafita, only six years of age, carries with her the dignity of our girls of eighteen. It attracted my attention particularly the evening I came, with the same ease of a lady much accustomed to society, she entered the room, with a polite bow and "Bonus tardes", shook hands with me and seated herself. --The eldest daughter of 17 years is sick with sarampion." (This girl would seem to be Maria del Refugio and the other two girls Adelaida and Concepcion. The boys could have been away at school.)

On the 18th, she wrote: I am altogether pleased with our boarding house --the inmates are exceedingly kind and exert themselves so much to make me enjoy myself, 'twould be cruel if I did not attend to their solicitations. We have chocolate every morning on rising, breakfast about 10 o'k. dinner at two, chocolate again at dark, and supper at 9 o'oclock, all are attentive, indeed we are so free and easy, 'tis almost a hotel, means are served in our own room, one of the ladies always being in attendance to see and know if we are propperly attended to; the dishes are often changed, and well prepared. I shall have to make me a recipe book to take home, the cooking in every thing is entirely different from ours, and some, indeed all of their dishes are so fine 'twould be a shame not to let my friends have a taste of them too."

Padre Ramon eventually fell ill with cancer and died on March 11, 1896. According Sisneros (p. 117) the El Paso historian Cleofas Calleros wrote that "the beloved priest's funeral was probably the largest ever witnessed in this area and was attended by thousands who crowded in and around the church in Ciudad Juarez.... The long procession to the cemetery was composed of more than eighty carriages and over fifty horsemen. On this solemn day he was interred in the cemetery adjoining the chapel of San José located four miles south of Ciudad Juarez."