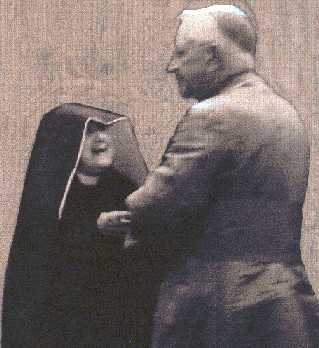 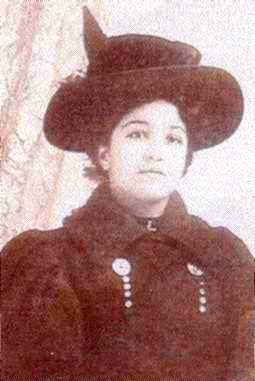 To the left is Sr. Gertrude and to the right Nicolasa Delgado two years before becoming a sister.
The picture of Sr. Gertrude and much of the information here was sent to me by Sr. Kate, the Archivist of the Sisters of Loretto.

The above picture was featured in a newspaper article from September 1950. It read:

"A Nun in N. Mex. 73 Years. Ninety-one year old Sister Mary Gertrude, who has spent 73 years as a religious in New Mexico, appears with His Eminence, Cardinal Samuel Stritch of Chicago on Monday, Sept. 4, when he said Mass for all the nuns in Santa Fe. Sister Mary Gertrude was Manuelita Delgado of Santa Fe before she entered the convent one year before Archbishop Lamy died. As a young girl she frequently attended Archbishop Lamy's Mass and received Holy Communion from the prelate honored in the centennial celebration held in Santa Fe Sept. 3."

Manuela Delgado was born in Santa Fe on January 19, 1860. She was the daughter of Felipe S. Delgado (1829-1895) and Benigna Garcia (1837-1908). He was the son of Manuel Salustiano Delgado and Maria de la Luz Baca. Felipe had five brothers: Simon, Fernando, Pablo and Felipe B. and two sisters, Josefa and Estefana, Manuela's uncles and aunts.

It seems that Manuela had a twin brother Manuel, who must have died at a young age. It also seems that she had a number of brothers and sisters who died at an early age. The siblings who grew up were:

The twenty room home of the Delgado family was on San Francisco St., where the Lensic Theater now stands.

In Old Santa Fe, Twitchell cites an article of the Santa Fe Gazette that calls Don Felipe Delgado a man of integrity and honesty of purpose (p. 354). He is said to have been a very devout Catholic.

Sister Gertrude made her first communion in 1869 or 1870 in Saint Francis Cathedral, Rev. Peter Eguillon, pastor. She was confirmed by Archbishop Lamy and attended the school of the Loretto sisters in Santa Fe for several years.

Mother Praxedes used to recall how Sister Gertrude arrived at the novitiate. "She rode up on a beautiful horse which she handled dexterously. She wore a dark green riding habit piped in gold of the existing style, and a plumed cockade riding hat. She was most distinguished looking."

On December 8, 1877, she received the veil in the convent chapel in Santa Fe. She made her first vows on December 8, 1879 and her final vows on March 16, 1883. She taught in the public school for eight years. She lived in Santa Fe from 1877 to 1887; in Socorro from 1887-1892 and then was changed back to Santa Fe where she acted as sacristan and assisted in teaching. She had had the distinction of having served as Sacristan for every Bishop of Santa Fe from Lamy to Byrne.

Sister Gertrude was at Santa Fe when the miraculous staircase was built in Loretto Chapel. According to her it had no banisters at first and she had to go up on her knees since it would make her dizzy to try to walk up.

In Romance of a Little Village Girl (Albuquerque: University of New Mexico Press, 2000 (1955)), Cleofas Jaramillo remembered Sister Gertrude when she wrote of her Loretto Academy days: "Each year my studies became more interesting. There I could spread out into all the branches of study I could take. One day it occurred to me that I was neglecting my beloved language. I went to Sister Mary Xavier and I told her I would like to take some of my studies in Spanish. She looked at me quite amused. "And who is going to teach it to you?", she asked. I had not thought of that, but two days after, she told me that Sister Gertrude would give me Spanish grammar lessons twice a week after school. Rejoicing, I went to my lesson on the appointed days." (p. 52)

In the 1900 census Manuela Delgado is listed as a forty year old assistant at Loretto Academy born in January 1860. Her 16 year old niece Nicolasa Delgado, who also became a Sister of Loretto with the name of Sister Victoria, is listed on the same page as a boarder at Loretto Academy.

When my mother Adelina Ortiz went to Loretto Academy, Sister Gertrude was the Sister Sacristan and used to offer her chocolate fudge. She says that this is a fond remembrance of a sweet and generous person who offered to shared what she had. Adelina says that Sr. Gertrude was really small, shorter than 5 feet tall, and wore one of those nun's habits that make you look like the flying nun. She was in a place with 20 foot ceilings and the home made chocolate fudge was really high up. So she had to climb up ladder after ladder to get the chocolate fudge for my mother, who was really worried that she was going to fall.

The following obituary appeared in the Santa Fe Annals of December 17, 1951.

"We are grieving, yet rejoicing at the loss of our dear Sister Gertrude Delgado, 91 years of age, and the third oldest Sister of Loretto in the order, R.I.P., who passed away quite peacefully on the 17th instant.

In recent years she had been in charge of the Loretto Chapel and for many years she devoted herself to taking care of the Priests, the vestments and the Sacristy of Our Lady of Light Chapel. It was her privilege to wait upon and serve the Mass as a novice, and also in later years for his Excellency Bishop Lamy, Bishop Salpointe, Chapelle, Bourgade, Archbishop Pitival, Daeger, Gerken and now the present encumbent, the Most Edwin Vincent Byrne, 8th Archbishop of Santa Fe.

We will miss our dear eldest Sister, her sweet gratitude to us for any small favor, her great example of exactitude in attending her exercises, her interest in everything about her in spite of her great age endeared her to all of us, but we rejoice that she will spend Christmas with the Christ Child whom she, in her later years, so much resembled.

The body lay in state in Loretto Chapel and the Sisters rejoiced to stay up during the night and such hours as they could get away from their duties during the day --Sister looked 40 years younger than at the time of her death. Six or eight Sisters were with her when she passed away. She had some slight discomforture on account of her throat being choked up but she had a very peaceful death.

His Excellency said the Mass and as many Sisters as were free went to the Cemetery to the funeral. Great numbers of Santa Fe people attended the funeral.

Sister made her Novitiate here and spent most of her life here in Santa Fe."

Sister Gertrude is buried among the Loretto Sisters in Rosario Cemetery.

Nicolasa's parents married on April 6, 1877. The Church record of their marriage reads:

Her father died December 15, 1891, when Nicolasa was barely eleven years old. His obituary reads: Death's Work. Antonio Delgado, aged 34 years, son of Judge Felipe Delgado, died at 4 o'clock yesterday afternoon. He leaves a wife and three children and a large circle of friends to mourn his loss. A complication of lung and heart trouble was the cause of death. This is the second son Judge Delgado has lost in nine months and general public sympathy is expressed for him and his. The funeral takes place tomorrow forenoon.

He was buried in Rosario cemetery next to his parents Felipe S. and Benigna and his siblings José and Luz. On his tombstone is written born July 13, 1857 and died on December 15, 1891 at the age of 34 years, 6 months and 3 days.

Antonio's nephew Leopoldo, the son of Emilio, apparently often said that his Uncle Alfredo was a very good cheerful uncle, not like Emilio who was "cranque" all the time. However, Antonio, the brother of Emilio and Alfredo, was remembered as being worse than Emilio when it came to being "cranque".

Antonio died leaving three minor children, Benigno, Felipe and Nicolasa. Benigna must have taken them under her wing because the 1900 census lists them as living with Benigna in the Delgado home on San Francisco St where, Sister Gertrude Delgado SL grew up, and as being her sons and daughter. In particular, Nicolasa is listed in the 1900 census as Benigna's 15 year old daughter. She is also listed in the 1900 census as a 16 year old boarder at Loretto Academy. I think that her brother Felipe could well have been the Felipe Delgado who became a Hollywood actor.

Nicolasa made her first communion in New Mexico in 1895, Rev. A Fourchegu, Pastor. She was confirmed in Santa Fe by Archbishop Chapelle, 1895. She attended the parochial school and Loretto Academy in Santa Fe. She completed Eighth Grade studies.

Sister Kate of the Loretto Archives sent me a letter written by Sister M. Claudine of Loretto Convent, Las Vegas NM to the Reverend Mother General in Loretto, KY on September 16, 1927. It reads:

"Dear Reverend Mother: Martiniana Delgado wishes me to enclose the formula for admittance into the Society. She is a motherless girl and has been with the Sisters of Loretto since she was a tiny girl. Sisters Matthias, Anastasia and Felicitas think a great deal of her. She is a very nice child, finished Hight School last year and is a gifted musician, but timid. He heart is not perfect and for this reason she has left one question unanswered. She is never in bed of account of sickness and apparently in best of health. She is very anxious to hear favorably from you. Her uncle who has been providing for her is willing that she go as she is very earnest. With devoted love, I am, your obedient child at the Cross.

She entered the congregation of the Sisters of Loretto, but left in 1927 due to ill health.

I have a death certificate for Martiniana's father Margarito, who died at home on South Pacific Street in Las Vegas on died June 6, 1930 at 9 am. He is given as the widower of Adela Gonzales. His trade was merchant and his business merchandising. He had worked at this job for five years until June 1930. He was born in Las Vegas and his father was Ismel Delgado, born in Rio Arriba Co. His age and birth date are not given. His mother's name was not known. The informant was Joe Delgado of Las Vegas. Now the cause of death is given as "poisoning, by drinking poison" "poison taken internally". The onset of this was the day of his death and the contributory cause is given as "insanity" that began two days earlier on June 4, 1930. Where one was to check accident, suicide, homicide, the check is in between suicide and homicide and there is a question mark. He was buried in Mt Calvary Cemetery on June 7, 1930.