Sun, Shade and the Land, by Adelina Ortiz de Hill 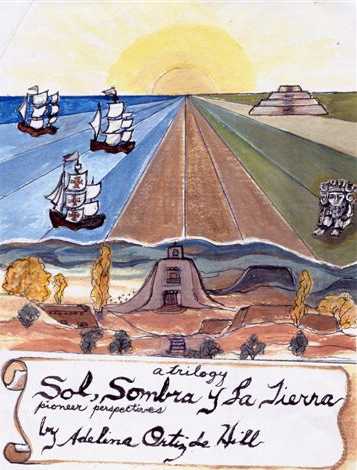 This book is written in English. It is divided into three parts entitled: "La Ventura Brava --A Challenge" (pp. 1-26); "La Alza y Bajo de Dominios --The Rise and Fall of Dominions" (pp. 27-38); and "El Camino Real --The Royal Road" (pp. 39-118). Part 1 starts in 409 AD and is subdivided into sections entitled: "The Scene and a Royal Dynasty"; "A Dynasty"; "A Passage to Know a World"; "Cultures and Clashes". It spells out complex historical inter-relationships in Europe.

The tone of the book is set in the prologue, where the author writes: "My choice of the term prologue... is a conscious attempt to begin a dialogue on the events that perpetuated myths and the legends that affect us today.... My stance... will be to cover some of the events that led to my being here and what defines me as an American in today's world. My family history and that of my ancestors (antepasados) is complicated by the black legend (la leyenda negra) and the defensive posture of those who have justified their history as Manifest Destiny, often leaving the truth to myth and legend.... It is a survey of events offering a personal surmise on the unique identity of the people of northern New Mexico. It begins in Spain at the time of its entrace on the world stage as a global power. The focus will then shift to Mexico, a new republic attempting to maintain a vast frontier. Finally to New Mexico, the territoral home of some of Europe's earliest settlers." (pp. ix-x)

This reviewer found particularly interesting the author's accounts of segregation in New Mexico. For instance, she writes of her time in Tucumcari. "It is close to Texas and a part of what was known as the 'Bible Belt." It too was segregated. The lines were drawn along income, color and ethnicity.... I was forced to come to terms with what I believed as an American, A Spanish America and a Catholic. I was brought up not to be intimidated by political, religious or social power. Like many of the young couples new to the community, we were a post-war generation willing to put our ideals into action. Most of us belonged to the League of Women Voters. We were all well-connected liberals and educated..... Most of us did not approve of the way the community was so divided and the social injustice of inferior services for the poor. The public library, the swimming pool, the schools and the town were segregated. The other side of the railroad tracks was a black and Mexican neighborhood; the church and parish school were located in a quadrant where older Spanish-speaking families had settly. Highway 66 separated the newer and more exclusive neighborhoods. Even Highway 66 was segregated; approaching Tucumcari there was a sign directing blacks to the Blue Rocket Inn for dining and lodging. Stella Jones, the owner, was also a teacher at the segregated school and a member of the League..... Tucumcari was a microcosm of the way it had been and was prepared to stay. Like so many communities, it was resisting change.... The elderly priest who maintained that unequal opportunity required groups to be segregated was replaced by a younger priest who opened Altar Society membership and encouraged open seating in the church. He ignored the social obligations of catering to the anglo matrons...." (pp. 112-13). Or then, there is the story of how George Washington Armijo "who always used his full name, had told us that one of greatest sources of pleasure was seeing the expression of conternation on the faces of barbers in southern New Mexico; A balding red-headed, blue-eyed "mesican", he lived to go into barber shops that had signs saying "No mesicans allowed." He'd ask for a shave and haircut, leave a big tip and inform the barber that he had jus shaved a Mexican. He loved the expression on their faces and just couldn't resist it." (p. 101.)

The Norwegian explorer Thor Heyerdahl married Yvonne Dedeham Simonsen in Santa Fe before Justice of the Peace Arthur E. Robinson on March 7, 1949. They lived at Rancho Pancho and when the author met them when she returned from college. As she writes: "My father had rented the ranch to many interesting people over the years. The tenant this time was a person who thrived in cold weather and would even break the ice on the ponds to swim. He was a Norwegian by the name of Thor Heyerdahl, who was writing a book and preparing a lecture tour. He was already well known and could have had a pretty busy social schedule, but he guarded his privacy. He would invite us and visit us for dinner. He spoke Spanish and was an uncomplicated person. I had no idea he was famous. After his book Kon Tiki and his film was released, he sarted a tour. He said he planned to return, but he went on to other adventures, building rafts and challenging the sea" (pp. 109-10).