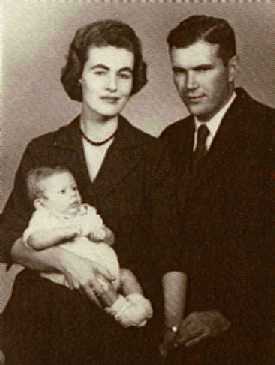 Miss Judith Williams, Lt. Thomas Hill Wed November 21, 1956. Alamogordo, N.M. --Following a wedding trip to the Gulf Coast and New Orleans, Lt. and Mrs. Thomas R. Hill will be at home in Alexandria, La. Marriage of the couple was held recently in Immaculate Conception Church, Douglas, Ariz. The bride, the former Judith Williams, is the daughter of Mr. and Mrs. John M. Willaims, Douglas. Mrs. Clifford M. Miller, Alamogordo, is mother of the bridegroom. Officiating at the ceremony was the Rt. Rev. Don Hughes, Tucson, assisted by the Rev. Edward Garscallen before an altar decorated with pedestal vases of calla lilies. Given in marriage by her father, the bride wore a long gown of Chantilly lace over ivory satin, styled with fitted lace bodice having high net yoke and long sleeves. The wide satin skirt had an overskirt of lace extending over the chapel train. A half-hat of lace encrusted in seed pearls held her tiered veil. She carried a cascade bouquet of gardenias.

Attendants of the bride were her cousin, Mrs. Howard Ames Jr., matron of honor, and her sister Miss Jocelyn Williams, junior bridesmaid. Mrs. Ames wore a long gown of candlelight Chantilly lace and illusion over taffeta, with fitted lace bodice and wide skirt. She wore a half-hat of matching lace and carried a colonial bouquet of gardenias.

Miss Williams wore a long gown of candlelight brocade taffeta with bouffant skirt and fitted bodice having panels falling from the shoulder at the back. Her matching cap was encrusted with seed pearls and she carried a nosegay of miniature gardenia.

A reception in the home of the bride's parents followed the ceremony.

The bridegroom attended Texas A&M College and is a graduate of United States Military Academy, West Point, N. Y. He is stationed at Ft. Polk, La. with the First Armored Division.

Mr. Hill was born April 22, 1928 in Flagstaff, Ariz. He spent his childhood in Alamogordo before joining the U.S. Army. He was a veteran of World War II, the Korean War and the Vietnam War.

After graduating from Alamogordo High School in 1946 he attended Texas A&M University. In 1949 he entered the U.S. Military Academy at West Point and was an honor graduate in the class of 1952. He served in the U.S. Army in Korea and Vietnam, retiring as a major in 1970. He was awarded the Aviators Badge, the Legion of Merit, six Air Medals, the Bronze Star, the Army Commendation Medal, and the Service and Campaign Ribbons.

He received his masters degree in 1974 from the University of Texas at Austin in numerical analysis and computer sciences.

After moving to Alamogordo in 1990 he became a member of the Alamogordo Search and Rescue Team and the Amateur Radio Emergency Service.

He is survived by his wife Judith Hill of the family home; three sons, Robert L. Hill of Stillwater, Okla., Captain John M. Hill of Austin, Texas, and James W. Hill of Tampa, Fla.; two grandchildren Johanna and Jack Hill of Austin; and an aunt Georgia Johnson of Phoenix, Ariz.

Mr. Hill was preceded in death by his father Herbert Hill, his mother Lorena Hill Miller and a brother, Milford Hill.

Funeral services will be conducted Friday at 10 a.m. at the First Baptist Church with Dr. Robert Butler officiating.

Interment will follow in the Monte Vista Cemetery with military honors to be provided by the Holloman Air Force Base Honor Guard.

Honorary pallbearers will be members of the Alamogordo Search and Rescue Team and the Otero Couny Amateur Radio Emergency Services.

Should friends desire, contributions may be made to the First Baptist Church or the Salvation Army.

Tommy had had congestive heart failure, just as Milford had. Judy died in Alamogordo in October 1997.